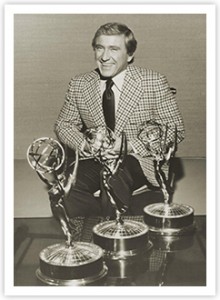 During his career, Merv received 29 Daytime Emmy nominations and won 10, as well as receiving the Lifetime Achievement Award in 1995. Some were for his beloved game shows, and others as Outstanding Host for The Merv Griffin Show.

In this video, Merv’s son Tony shares some thoughts about his Dad’s numerous Emmy Awards.